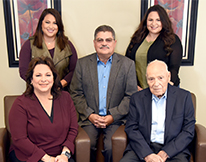 One of Daniel Ramirez’s fondest memories of his time at Victoria College during the mid-1950s was when he and some other students were caught pitching pennies between classes.

“An instructor told us, ‘Y’all can’t do that! That’s gambling!’ ” Ramirez recalled. “Then one of the guys told him we were all Korean War veterans.”

The instructor left the students to their game.

Ramirez, 89, served in the Army from 1952-54, spending most of his tenure at Fort Hood Military Base in Killeen. Jobs were scarce when Ramirez was honorably discharged, so he enrolled at Victoria College. The knowledge he gained in VC’s drafting class helped Ramirez land a job at Victoria’s Foster Field Air Force Base and led to a 33-year career with the Air Force and Navy before he retired in 1986.

“I was in the Army, worked for the Air Force, and retired from the Navy,” said Ramirez.

“There really wasn’t a choice. We were going to college,” Diana said. “He always told us ‘Your successes or your failures are on you. You can be whatever you want to be.’ ”

“It was really something if you graduated from VC’s program,” said Diana, who worked part time at the age of 16 changing bed pans at DeTar Hospital and is now a nurse practitioner for Employees Primary Health Care Clinic. “The percentage of graduates who passed the board exam was nearly 100 percent. The program really prepared us for real life on the hospital floors.”

Diana was hired immediately after graduation and helped support her family while her husband, Ben, who previously took summer classes at Victoria College, worked to acquire his bachelor’s degree in engineering at Texas A&M University-Kingsville.

Ben and Diana made sure their two daughters would also get a quality college education.

“When the kids were little, I started a college fund for them,” Ben said. “When they were born, I told Diana, ‘When they graduate from high school, we need to have money held back for them to go to college.’ And so when they graduated, we had that money saved. But college tuition had doubled from my original estimate, so taking summer classes at Victoria College really helped us financially.”

Katie, 29, enrolled in summer classes at Victoria College from 2008 to 2010 while attending Texas A&M University, where she obtained a bachelor’s degree in tourism management.

“Just having those first courses here and learning how to interact with different types of people really prepared me for A&M,” Katie said. “That was invaluable.”

“School was a lot harder for me than it was for Katie,” Jenny said. “The math courses at VC really helped me get ready for Texas State.”

After graduating from Texas State University with a bachelor’s degree in communications, Jenny worked almost two years at Victoria College as a community outreach specialist.

“It was really neat to be able to go out in the area and inform people of what Victoria College has to offer,” Jenny said. “I enjoyed helping others begin their journey into college and beyond.”

“Victoria College offers so many tailor-made courses,” said Diana, who obtained her bachelor’s and master’s degrees in nursing from Texas A&M University-Corpus Christi. “You can either take a whole semester of classes or take classes in bits and pieces. Either way, you can still get where you want to go.”